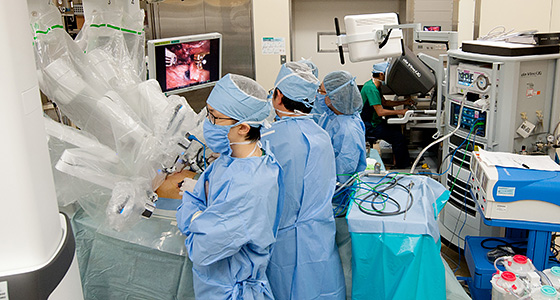 Our hospital is designated as a cancer care hospital for medical cooperation by the Tokyo Metropolitan Government, and mainly performs surgical treatment for primary lung cancer, playing a central role in the region. In addition to primary lung cancer, we perform surgeries for conditions such as metastatic lung tumor, spontaneous pneumothorax, and mediastinal tumor.

Suggesting optimal surgical method to each patient based on standard treatment

In Respiratory Surgery, we perform surgeries which are considered to be optimal in line with general condition of each patient. This is based on the standard of care as guided by clinical evidence. We make a surgical plan tailored for each patient, considering how we can perform surgery with minimal damage and what the best approach will be. No matter how much advanced technology we have, it will not be beneficial to patients if our ways of thinking are wrong.

We always strive to reduce the stress placed on our patients while maintaining the accuracy of surgery.

In cases where the lung tumor is small, or located away from the surface of pleura, we may not be able to sufficiently feel the tumor, and it may be difficult to comprehend the area to be resection.

For this type of cancer, “preoperative CT-guided marking”, under which, a needle will be stuck into a chest leaving a metal marker to the lesion was used to be performed. The method that was developed is VAL-MAP) Bronchoscopy virtual 3D lung mapping. Under the VAL-MAP, we will spray dye called indigo carmine on the surface of lungs for marking using bronchoscopy before surgery. Marking of 2 ~ 6 points will be possible, which will enable to capture the incision lesion accurately.

Message to our Patients

We make full use of skills which we obtained by new technology and experiences. We also introduced various new treatments proactively. At the time of the selection of the treatment, we properly discuss the merits and demerits to our patients, to empower patients to be part of the decision making process.